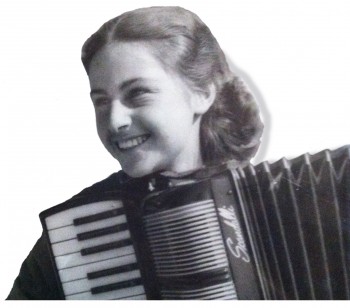 Meals On Wheels client, Brigitte with her accordion.

In August 1939, the Soviet Union invaded Lithuania and Brigitte’s world started to change.  Born in 1924, she was the only child of an affluent, Jewish businessman.  Then, in June of 1941, the Nazis invaded Lithuania – now a part of the Soviet Union – and launched a rein of almost unimaginable terror.  Gone were the carefree days of paper dolls and pursuing her passion of reading.  The world had changed.  At the time, no one imagined the enormous loss of life that would nearly wipe out the entire Jewish population of Lithuania.

At the age of fourteen, Brigitte and her parents were forced to leave their home in Memel, a coastal town on the Baltic Sea, just north of Poland.  They were relocated to Kovno – later referred to as the Kaunas Ghetto – and were crammed into a single room on the second floor, without electricity or running water.  The Nazis ordered all Jews to identify themselves by sewing a yellow Star of David on the front and back of their clothing.  “It was so painful,” Brigitte remembers.  People in the ghettos were forced to work for the Nazis.  To make matters worse, food was extremely scarce and there was no medicine.  Her mother became extremely malnourished and developed pneumonia.  Consequently, Brigitte went to collect the family’s food rations.  While Brigitte waited in line for something to eat, her mother died of starvation.

Soon, the Nazis started rounding up the ghetto children.  They were taken from their families and sent away.  Nobody knew the fate of the children, so Brigitte’s father hastily made arrangements to smuggle Brigitte out of the ghetto.  “A kind woman who was my father’s former bookkeeper took me in,” Brigitte recalled.  “I remember being on a boat on the river with several workers as I escaped from the ghetto.  The woman met the boat on the riverbank and took me to her apartment.”  Although Brigitte spoke five languages, she was to pretend to be a Lithuanian peasant girl and play the role of the woman’s maid.  In an odd twist of fate, a German officer took up residence in the woman’s home.  Brigitte attended to her household chores and pretended not to understand German.  She knew that if the German officer even suspected that she had escaped from the Kaunas Ghetto, she would be shot on the spot.  The homeowner’s life was also in grave danger for harboring a Jew.

When the situation became too dangerous, Brigitte was sent away to a remote farm.  “There were escaped Russian prisoners of war hiding out on the farm as well.  I was told to milk the cows and was given other farm chores to do.”  In a brief moment of levity, she added, “I was the slowest milker ever!”  Life on the farm was difficult and the owners were unkind to Brigitte.  “I didn’t make many friends,” she said, “I was just trying to survive.”  Brigitte went on to tell me that shortly after she escaped from the ghetto, her father was sent to the notorious Dachau concentration camp.  He was one of the lucky ones.  He survived.

At the beginning of World War II, there were approximately 210,000 Jews in Lithuania.  An estimated 195,000 of them were murdered.  Most of the Jews were not sent to ghettos or concentration camps.  The majority of them were rounded up, forced to dig their own graves, and executed.  It was not until about halfway through the war that the Nazis decided to use the Jews as forced labor to support the war effort.  In all, only about 15,000 Jews escaped the ghettos or survived the concentration camps. Oddly enough, Brigitte does not remember the end of the war.  However, when it was finally safe to leave the farm, she made her way back to her family home in Memel.  Sadly, their home had been sold or given to another family.  Brigitte knocked on the door and a strange woman answered.  “She would not even let me come into the house because she was afraid that I had lice,” Brigitte recalled.  Despite having no money and the destruction of so much of the infrastructure, Brigitte made her way to Italy to go back to school.  She enrolled in medical school and planned to move to Palestine after her studies.  It was in Italy that Brigitte was reunited with her father.  “He found me through word of mouth,” Brigitte said.  The two of them moved to the United States in 1949-1950 and were taken in by relatives in Dallas.

Not long after they arrived in Texas, Brigitte was introduced to Fredric (Ric), a U.S. airman, stationed at Carswell Air Force Base in Fort Worth.  “I thought he was so handsome,” Brigitte said with a schoolgirl grin on her face.  The two were married in 1952 and raised a family – three boys and one girl – in Fort Worth.  Ric passed away in 2002, but Brigitte is still surrounded by the pictures that adorn their home and the memories that they created together. 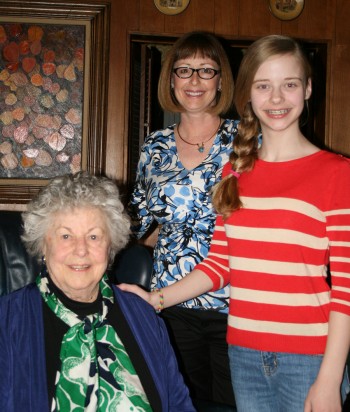 Brigitte with her daughter, Leslie, and granddaughter, Lauren.

Now it was Brigitte’s turn to ask the questions. “Tell me something about yourself,” she said.  What could I possibly say to her after hearing about the atrocities of her life during the war?  I had it!  “Well, when I was a kid, my parents made me take accordion lessons,” I started.  Brigitte’s eyes immediately widened and she sat up straight.  You guessed it, Brigitte plays the accordion, too.  “Will you play for us?” she asked.  I agreed, thinking that I would bring my accordion by her home one day soon.  Well, within about thirty seconds, Leslie, Brigitte’s daughter, had produced an accordion from the hall closet.  I pulled Brigitte’s accordion from its case and played Lady of Spain.  Brigitte closed her eyes and swayed to the rhythm of the song.  Afterward, I asked Brigitte if she still played.  “Yes,” she said with a huge smile on her face.  I set the accordion on her lap and she pumped out a beautiful rendition of Lady of Spain for me. I fought to hold back the tears.

I was deeply moved by Brigitte’s story.  At this point, I was unsure of what to ask her next, so I turned to Leslie and asked her to summarize her mother in one sentence.  “She can lift the spirits of others,” she said.  I had to let that sink in for a minute.  How was that possible?  Sitting in front of me was a beautiful, regal woman, who has not let others define her life.  Despite the suffering, she has charted her own course.  And then it came to me.  Brigitte had experienced humanity at one of its lowest points.  Her mother died of starvation while Brigitte waited in line for food rations.  Now caring volunteers bring food to her.  As I sit at my desk and write this story, I have tears in my eyes.  Each of you who support Meals On Wheels is proving to Brigitte that goodness and compassion prevail in the human spirit.

As I was preparing to leave, I asked Brigitte to tell me what she had learned in life.  “Take things as they come,” she said, “and try to make a difference in the world.”  Finally, I asked her, “What is the title of the book about your life?”  She smiled at me and said, “A life worth living.”

As Leslie walked me out, she said, “I have to tell you what Meals On Wheels has meant to us.  My mother can no longer prepare her meals, but I know that she gets nutritious meals to eat.  However, most of all, Meals On Wheels has given my family our lives back.  Since we cannot be here all of the time, we are very grateful that the people of Meals On Wheels are helping us look after my mother.  Please thank everyone who makes this possible and tell them what a difference they are making in our lives.”

On behalf of Brigitte and her family, thank you for your generous support.  At Meals On Wheels, Inc. of Tarrant County, we never take it for granted.  Because of you, we can help thousands of deserving seniors and other homebound individuals in Tarrant County…and Brigitte’s spirit can soar once again.