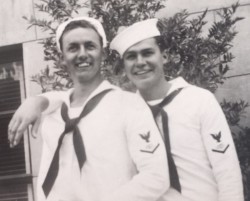 Jack (left) and one of this buddies while he was stationed in San Diego.

This man can talk your ear off, but I can assure you that nobody who takes the time to call or sit down with Jack is looking at their watch or thinking of how they can politely end the conversation. Even at 91-years old, Jack is just one of those guys with whom you enjoy spending time.

Born in Memphis, Tennessee in 1924, Jack was the middle child of three children (and the only boy) born to second-generation Swedish immigrants. Two years after Jack was born, his family moved to Dallas, where they lived for two years until they moved to Fort Worth. If I am doing the math right, Jack has lived in Fort Worth for 87 years. I think we can all agree that officially makes him a Texan.

Jack’s younger sister, Betty Jean, died of bone cancer at the age of 15, and the other went on to be a part of the first graduating class of Arlington Heights High School. An avid athlete, Jack was the first student at Arlington Heights to letter in all four major sports: football, baseball, basketball, and track.

During his freshman year, Jack– who could not swim – and one of his friends decided to enlist in U.S. Navy and went to boot camp in San Diego. “You’ll never guess who I went to boot camp with,” Jack asked me. “Henry Fonda! Most of the fellas were 18. Henry was 37, but we all fell in together right away. I was 6’2” and he started calling me ‘Big Slim from Texas.’

I was stationed in San Diego for three months and was put on shore patrol duty. Now you may not know who this is, but one night I met Betty Grable.” “Seriously, Jack?” I responded, “Betty Grable was the pin-up girl for WWII. Her legs were insured for $1 million!” At that, Jack laughed that I knew anything about Betty Grable. I think my “street cred” with Jack had just gone up 100%!

After Jack complained about being stuck on shore patrol, his commanding officer asked if he could fight. “Well ya, I can fight,” Jack told him. “So I ended up boxing on Saturday night so I wouldn’t have to do shore patrol. One night, I had just won a fight when they told me that two fellas wanted to meet me. I told them I was tired, but they insisted. I walked out there and it was Bob Hope and Bing Crosby! Bob Hope was a boxer before he got started in show business. He shook my hand and said, ‘Son, I like your footwork.’ ” 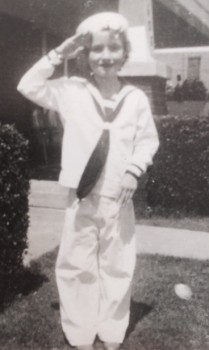 This is the picture that Billy Jean sent to Jack while he was stationed in Guam. He kept it with him throughout the war.

Jack knew how to type, so he learned Morse Code and became a radio operator on a freighter. He later made Petty Officer and told me how they came up on a surfaced Japanese submarine in the middle of the night. “We were pulling a barge of food and supplies that night,” he remembered. “The Japanese torpedoed the barge. We cut it loose and got out of there as fast as we could.” Jack was stationed in Guam and told me that one day he received a letter from home with a picture of Betty Jean dressed in a navy uniform along with a letter telling him how proud she was of her older brother. Jack still keeps that picture with him.

After the war, Jack went to North Texas State Teacher’s College (now UNT) on the GI Bill. “I went there because Texas State Women’s College (now TWU) had a lot of girls. There were 3,000 boys and over 5,000 girls, so I thought my chances were pretty good,” he teased. Jack played baseball in college and went on to pitch in the minor leagues for five years.

As it turned out, Jack had a pretty good singing voice. He and some of his buddies started a Rock-n-Roll swing band in the 1950s, called the Desmond Brewer Band, and Jack was the band’s vocalist. “We got our drummer from Lawrence Welk’s band,” he said. “That was a lot of fun. We used to play down in Temple every Saturday night. It wasn’t my favorite song, but everyone always wanted me to sing ‘Swanee.’ You don’t know that one, do you?” Jack apparently does not know me very well. It does not take much for me to break into song, so I started singing, “Swanee, how I love you, how I love you, my dear old Swanee.” I got another hearty laugh from Jack, who could not believe that I knew the words to that song. Don’t tell him, but those are the only two lines I know!

Jack went on to work for the U.S. Postal Service for the next thirty years and retired in 1984. Jack now lives alone and looks forward to watching Dancing with the Stars and Survivor on TV. In July, Jack was diagnosed with pancreatic cancer. “I’ve had a good life,” Jack said. “I never thought I’d live this long.” He is so thankful to Meals On Wheels for the meals that he receives and especially likes all the nice people who deliver his meals.

I have to tell you how much I enjoyed meeting Jack and hearing his stories. “Keith Harrison, I won’t forget your name,” he said. Jack, you are now one of my “buds” and I definitely won’t forget you, my friend. Trust me, the pleasure was all mine. 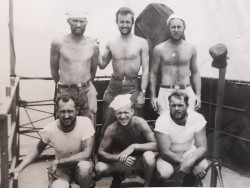 Jack, top-center, on board a Navy tug boat in the South Pacific.

On behalf of Jack and the thousands of other homebound elderly and disabled residents of Tarrant County who receive services from Meals On Wheels, Inc. of Tarrant County, thank you for your continued support. Your generosity is making it possible for Jack and the others to remain living independently – even at 91 – in their own homes.