A lot of us question the wisdom of jumping out of a perfectly good airplane. Jim had no choice but to jump.  He had just been shot down over France.  Now at the age of 96, Jim has spent most of his life with his head in the clouds.

Jim was born in Arkansas in 1920, but his family moved to Wyoming when he was just 4 years old. He was always fascinated with the rodeo, and when he was 16, he tried riding a bull.  “That didn’t go so well,” he recalled, “I lasted about 3 steps and ended up on the ground.”  When his mother got sick, Jim went to live with an aunt on a chicken ranch in California.  There, Jim developed a love of airplanes.  He learned to fly a Piper Cub in high school and remembers buzzing the barns on the neighboring ranches.

Jim dropped out of school in the 10th grade to help support his family. “It’s hard to imagine today, but we didn’t really have a choice back then.  There just wasn’t enough money to feed the family, so you did what you had to do to make ends meet.  It forced us to grow up fast,” he said.

At the height of the Great Depression, one-quarter of the American workforce was unemployed. Keep in mind that most women worked in the home and relied on their husband’s income, which averaged just $20 per week in 1935. As part of President Roosevelt’s New Deal, the Civilian Conservation Corps (CCC) was founded as a public work relief program for unemployed, unmarried men. “I didn’t even shave yet, but I got a job with the CCC and got $1 a day.  That would make a house payment in those days!”

When Jim turned 16, his dad wanted him to join the army. “I was just a boy.  They wouldn’t take me because I wasn’t old enough, so I waited until I was 18 and joined the Army Air Corps,” he said.  “I knew how to fly, but I enlisted in the Medical Corps.”  One of Jim’s most vivid memories from that time is meeting Charles Lindbergh.  “He was so tall!  I couldn’t believe it was actually him.  He was famous all over the world and there he was talking to me.”  After that chance meeting, Jim decided to take a flying test and passed, as they say, with flying colors.  He transferred to the Air Corps and received his commission after he completed flight training.

Jim was quarantined with German measles when the Japanese attacked Pearl Harbor. He spent the next year flying B-24 and B-29 bombers, and flew three raids over Japan. He later shot down 22 planes over England, and then got shot down himself over Northern France. “I had been hit, so I had to jump out,” he remembered. “As I was parachuting down, the German plane circled back around and I thought I was a goner! When he got close, he just saluted me and flew off! When I landed, I was met by a farmer with a pitchfork. When I showed him my American uniform, he hugged me and gave me some homemade wine.”

After the war, Jim could not find a flying job. He saw an ad for Greyhound bus drivers in Minneapolis and decided to apply.  In the interview, they asked Jim if he wanted to be a bus driver to which he replied, “no, but it beats running an elevator!”  He got the job and drove between Minneapolis to Winnipeg for two years.  “I had gotten married and my father-in-law didn’t want his daughter married to a bus driver,” Jim said.  “He worked in banking and got me a job in his bank.  My first day on the job, some guy wrote me a $10 hot check.” 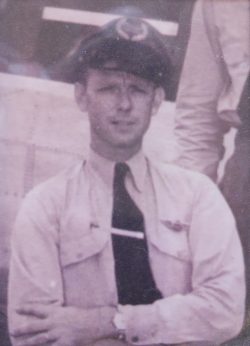 Jim never forgot his love of airplanes and ended up back in the cockpit as a co-pilot for Pioneer Airlines. He later came to Dallas as a captain for Central Airlines.  His first marriage had ended and Jim saw a girl waiting on a bus at the airport.  “I offered to give her a ride and a year later we got married,” he laughed.

Jim soon left Central to become a pilot for Sid Richardson. For the next 10 years, he flew Mr. Richardson and his friends all over the country.  “I flew Lyndon Johnson,” he recalled.  “He had the nicest wife.  The first time I met her, she tried to give me a $50 tip.  Of course I couldn’t take it.  After that, she always brought presents for my kids every time I flew them.  After Mr. Richardson died, Perry Bass took over and I flew a couple of years for him.”

Jim went on to work for American Airlines for the next 28 years as a Boeing® 727 flight instructor.  He raised six kids — three boys and three girls.  After his wife died, Jim fell and broke his hip.  “I went into assisted living, but they treated me like I had dementia,” he said.  “I made a good living most of my life, but they ended up taking all of my money.  I was very unhappy there.  I told my son I wanted to come back home, so here I am.”

“I need help to stay in my home,” he continued. “At first I felt guilty about asking for help, but Meals On Wheels is the greatest thing since Jesus Christ!  The volunteers always check on my health and are really nice.  I don’t know what I would do without them.” 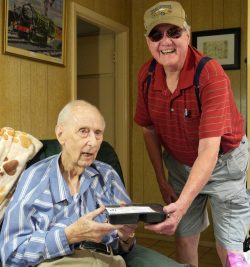 “Jim, you’ve lived a long time,” I said. “Tell me what you’ve learned in your 96 years.” I have to admit I laughed when he said, “I haven’t learned a thing.”  About that time, the doorbell rang and I offered to answer the door.  As I got close to the front door, I heard that familiar “Meals On Wheels.”  I opened the door and got to watch as James Lowenberg, Jim’s Thursday volunteer, did what our volunteers do best – make human connections.

After James left for his next stop, Jim stared at the front door for a short time and then asked me to tell all the volunteers thank you. “They may not think they’re doing anything special, but they’re making a big difference in my life.  I just can’t thank them enough.”  Before I left, I asked Jim if he had anything else to add.  “I’m looking forward to my 100th birthday,” he exclaimed, “because I’ll get free haircuts from my barber!”

On behalf of Jim and the thousands of other homebound clients we serve, thank you for your generous support. Because of you, people like Jim are able to live in their own homes, with their heads still in the clouds.