Some people just make you smile. Nora is one of those people.  The first time I met her, she was standing on the front porch with her walker, waiting on our arrival.  She had the biggest smile you have ever seen and she immediately started clapping her hands.  Those are two of my favorite things about Nora, her infectious smile and the fact that she claps her hands when she is happy.  I had not even gotten out of the car, but my heart melted the minute I saw her.

Nora also has a tender way of touching your arm when she walks. Sure, it may be just to steady herself, but to the lucky owner of that arm, it feels like the warm embrace of an old friend.  Speaking of a warm embrace, Nora gives great hugs.  They come from a happy place in her heart.

I have always thought that happiness is a choice. We all have circumstances that influence our lives, but ultimately, we make a choice to be happy.  Trust me, Nora made this choice.  Life has not always been easy for her.  To the contrary, her childhood was a constant struggle for survival. 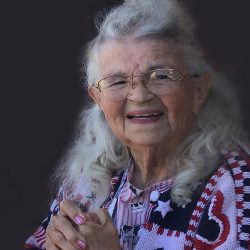 Nora was born in Eminence, Kentucky in the fall of 1925, four years before the onset of the Great Depression. I have often heard my parents and grandparents say, “we didn’t have much money, but our house was full of love.”  I believe that children should always be surrounded by love— the kind of love that makes them the absolute center of their parent’s world.  However, when Nora was just six months old, her parents divorced and gave her to a family member who agreed to take care of her…for a short time.

By the time Nora was just four years old, she had been passed around to several family members. Starting at that young age, she was made to get up every morning at 4:00 a.m. to start her chores on the farm, where she usually worked until sundown.  Sure, lots of kids helped on the farm in those days, but this was different.  Nora was passed around from one family to the next throughout her entire childhood.  If someone had a job that needed to be done — plowing fields, milking cows, forking hay — they would take her in until the job was done, and then she would be sent to live with another family who had some work to do.  “Nobody had any money.  We almost starved to death,” Nora recalled.  “We had to beg, borrow, and steal for everything we had.”

Nora never minded hard work. That is all she knew.  “I was so small that one man cut the handle off an old hoe so I could work the fields,” she laughed.  When I asked Nora about school, she said, “I went sometimes, but nobody had time for school.  There was too much work to do.”  The longest she stayed in any one place was about a year.  Most of the time, she only stayed a few months before being shipped off to another family.  “I didn’t have any toys. I used to tie sticks together to make dolls.  That’s all I had.  I was always too busy working to have time to play. ”

I asked Nora if she made her own clothes. “We’d make dresses out of feed bags,” she said. “But that was for when we went somewhere.  Most of the time, we just wore rags.” Nora said that she was often forced to live in chicken houses because there was no room in the house.  “I just slept where I could find a place.  I was lucky if I could find some straw to sleep on.”

At ten years old, Nora started washing dishes (by hand) at a café in Louisville. “They paid me $6 per week plus room and board,” she said. “That’s where I rode in a car for the first time.  The owner of the café bought a car and let me ride in the rumble seat.  That was so much fun!”  When I asked Nora about dating as a teenager, she just laughed.  “I never went on a date.  Nobody had time or money for a date.”

When she was fifteen years old, Nora married a young man named Alonzo. Two years later, he was killed in an accident when he fell under a train.  As a 17-year-old widow, there were not a lot of options for Nora.  A lawyer took her in to look after his elderly mother.  Nora was thankful for the work and stayed with that family for quite a few years.

At the age of thirty, Nora married a man named Jack, and they had two children, a boy and a girl. “Jack played the guitar and would play for anyone who needed a guitar player,” she recalled.  “We moved to Nashville because there was more work for him there.  I usually got a job cooking or cleaning, but we never had much money.”  Jack died many years ago and Nora ended up in Fort Worth.  “I used to cook at Diamond Oaks Country Club,” she proclaimed with pride.  “I worked there until I had a stroke and had to retire.”

Today, Nora relies on Meals On Wheels for a hot meal. When asked what she wanted to say to everyone involved with our program, she said, “Tell them thank you, thank you, thank you, thank you!”  Nora looks forward to seeing the volunteers each day.  “One of them brought me flowers for Mother’s Day,” she said as she directed my attention to a bouquet of beautiful yellow roses.

“I always worked hard and never had much money, but if I’d see a person on the street with nothing to eat, I’d give them a dollar or two because I know what it’s like to be hungry,” Nora concluded. “Meals On Wheels has made a big difference in my life.  The food is good and I thank God every day that I can sit here with my feet up and somebody will bring me something to eat.  I used to be a good cook, but now I’d set the house on fire.  You promise to tell all of them how much I love them and thank them from me.”

As I started to leave, Nora grabbed my arm and told me how much she had enjoyed our talk. Then she clapped her hands.  I cried.  I got in the car and said a prayer, thanking God for my wonderful childhood, for my amazing parents, and for all of the love in my life.  I was heartbroken that Nora did not have the same experience as a child.  Driving home, I wondered how someone who had been passed around so much in her life could be filled with so much love for others.