“I’ve been single long enough and you look like a pretty fine woman.” Let’s face it, a lot of men are not overly romantic and sometimes struggle to express their emotions. However, when these simple and slightly awkward words are motivated by love, they can change lives.

Evelyn was born in Tulia, Texas in the summer of 1930 (in case you are wondering, Tulia is 46 miles south of Amarillo). She was the second of four children, three girls and a boy.

“Daddy was a disabled vet,” Evelyn recalled. “He was in the army and fought on the front lines in World War I — the Great War. It took a toll on Daddy. He came back shell shocked.” That term was coined in WWI to describe the symptoms we now know as posttraumatic stress disorder. Regardless of what you call it, it is the result of horrific warfare. “He would start screaming in the middle of the night and Momma would wake him up and say, ‘I’m here, honey, it’s okay.’” 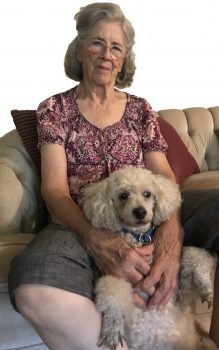 “When I was pretty young, Daddy moved us to an 80-acre farm in Poolville [Parker County],” Evelyn continued. “There were six of us in a small, two-bedroom farmhouse. During the summers, I would sleep on a pallet on the back porch to stay cool. Daddy had to support our family on just $21 per month. We saved everything. Momma bought sugar, salt, flour, and shortening, but that had to come out of the money we got from selling cream and eggs.”

“My job was to milk the cows and take care of the chickens. I was only five or six at the time. That’s hard work when you’re that young. When I was milking the cows, I loved to squirt milk to the cat until one time I got caught wasting milk,” she laughed. “Oh, Daddy was mad and said, ‘There went the cream money!’”

I asked Evelyn about a fond memory from her childhood. “Momma and Daddy were great parents,” she replied. “When I was a kid, we had a washtub to take a bath. We didn’t have indoor plumbing, so we filled the washtub with well water. We all shared the same water, so we took turns who got to go first.”

“We lived pretty far outside town, so I had to walk a mile to catch the school bus and then it was a long ride to school. When I was 14, I started working the summers at the state hospital. I started off in the

laundry room, then they put me in the dining room,” she said. “Later, I took typing in school, so they transferred me to the dietitian department to type up the menus.”

“After high school, I was working at the switchboard at the state hospital when I met a man named Lloyd,” Evelyn said. “We got married in 1950. He was an optician and he gave me my first glasses. Oh, he was a hard worker and I don’t mean maybe. He got a second job at Western Union so he could save up money for a house. He bought the house next to his parents and paid it off before we got married!”

Lloyd and Evelyn had three children, one of whom was stillborn. This is the point where Evelyn’s story became difficult to tell. I want to be sensitive to the pain and turmoil that Lloyd and Evelyn shared. Mental illness, especially in those days, can take a toll on a family. “I’ve tried to black all of that out,” Evelyn said with a pained look on her face. “Lloyd was bi-polar.” I was saddened as Evelyn told me the story. At one point, Lloyd was hospitalized for a breakdown. While in the hospital, he committed suicide.

“After Lloyd was gone, I had to raise the kids on my own,” she said. “By then I was working as a teacher’s assistant. I took in ironing and got a job as a night waitress just to support my kids. I had 23 ironing customers and charged $1.50 per dozen items.”

Then our conversation took a lighthearted turn. “I met my second husband through correspondence,” Evelyn giggled. At that, I teased her that must have been the 1970s equivalent of online dating. “Back then, people just wrote letters to people they didn’t know. You might hear of someone through another letter and decide to write and introduce yourself. Olan loved to write letters. One day I got a letter with his picture in it. I decided to write him back just for the fun of it. Well, he kept writing to me.”

“In one letter he wrote that he didn’t know what I looked like and asked me for a picture,” she laughed again. “I sent him a picture and after he got it, he drove out from Alabama to see me in person. I asked him to come over for supper. He stayed in town for a week and would come over every night for supper.” “So how long was it before you got married,” I asked. “Too long,” she laughed. “Well, a lot of men don’t like to rush into things,” I told her. When I asked how he proposed, she told me, “He said, ‘I’ve been single long enough and you look like a pretty fine woman.’ That was all it took and we got married!”

Olan moved to Texas to be with his new bride and became the pastor of Faith Baptist Church in Wichita Falls. The two of them were very happy together. “Olan developed a heart condition and nine years after we were married, he had to have open heart surgery,” she said. “He was bedridden and had to go into a nursing home. In the end, he couldn’t even talk.” Olan died just 10 years after they got married.

Evelyn moved to Hurst seven years ago and now receives home-delivered meals. “Some days I can’t walk without holding the walls,” she said. “I have neuropathy in my leg and I’ve fallen four times. The pain is from my back to the end of my feet.”

When asked about Meals On Wheels, Evelyn responded, “I love the volunteers! They are a happy group of people. I’ve gotten close to one of them in particular. And the food is always good.”

“Okay, Evelyn,” I said. “I have to ask you about your poodle. She doesn’t seem to let you out of her sight.” “That’s Sheia,” she said. “She’s 11 years old. She’s the sweetest little puppy you ever saw. She’s right there beside me when I stumble. She’s really my companion now.”

It seemed like the right time to wrap up the interview. Evelyn has definitely had some difficult times in her life, but she and Sheia are facing the world head on. It is great to see them together, especially when Sheia sits up on her hind legs and leans back against the couch for a tummy rub.

On behalf of Evelyn and the thousands of people who are able to remain in their homes because of the nutritious meals they receive, I want to thank you for your generous support.